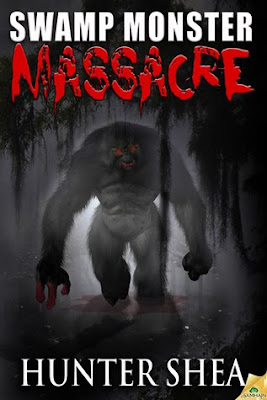 The swamp belongs to them. Humans are only prey.
Deep in the overgrown swamps of Florida, where humans rarely dare to enter, lives a race of creatures long thought to be only the stuff of legend. They walk upright but are stronger, taller and more brutal than any man. And when a small boat of tourists, held captive by a fleeing criminal, accidentally kills one of the swamp dwellers’ young, the creatures are filled with a terrifyingly human emotion—a merciless lust for vengeance that will paint the trees red with blood.

Rooster had perfect eyesight, but he still couldn’t make out the tall, broad figure through the wall of rain and gloom. It had to be a man, and one hell of a big one at that. If Rooster was right, it was over seven feet tall, if not eight. It was hard to tell with it all hunched down, wrangling the kid.

He was being lugged away from them by the ankle. He clawed at the sand in a futile attempt to halt his progress into the total darkness beyond the trees.

“Angelo!” his buddy shouted, running over to help.

Rooster was suddenly hit by an overwhelming odor that made the ball of mess in the water smell like potpourri. It was like a combination of gasoline, body odor, wet dog and the inside of a baby’s diaper. Everyone else must have smelled it, too, because he saw a lot of crinkled noses.


Suddenly, there was a loud roar, like what Rooster would imagine a tiger caught in a bear trap would sound like, that turned his blood to ice. And it was coming from the thing carting the kid off.

The kid’s friend was almost on top of him, and there was another roar, followed by a hard slap and the kid went down like Tyson had given him an uppercut. Rooster pulled the gun from his belt and cocked the hammer back.

A pair of red eyes cut through the murk, pausing for a moment on each one of them, taking them in, daring someone to make a move.

He took a few, slow steps forward, refusing to blink despite the irritating rivulets of water burning his eyes. The girl kept by his side. That wasn’t no man holding the kid.

He couldn’t recall any man being over seven foot tall and covered with hair. Its hair was long and matted and he realized the awful stink was coming off of it in repulsive waves. There was a small, hairless patch of what looked to be rough, sun scorched skin just around the nose, eyes and mouth. But those eyes. Dear God, it was like looking into the eyes of Satan himself!

“Let me go!” the kid shouted, breaking the stare-down. He tried to kick the beast with his free leg, but it twisted his body with the ease of flicking a jump rope, causing him to miss badly. There was a loud crunch and the kid wailed so hard, Rooster thought his throat would burst.

“Was that his ankle?” the girl whispered.

Rooster nodded. He sure couldn’t think of any man that could crush another man’s bones like that.

He didn’t need to be told twice. Rooster raised the gun and squeezed the trigger. The gun went off at the exact same time as a flash of lightning lit up their world, temporarily blinding him. When he opened his eyes, the beast and the Italian kid were gone.

A swath of sawgrass waved from side to side, the fading sign of the monster’s quick escape. The only sound was the pounding of the rain on the water and the long, heavy leaves of the trees.

How did I miss it? There was no way it could have ducked his shot. Nothing on earth is that fast. Nothing.

He looked down at the girl. “Stay right here.”

Everyone else was huddled together by the wrecked boat. Rooster strode over to where the other kid lay, keeping his gun well out in front. His finger applied enough pressure on the trigger to make the gun go off with the slightest provocation.

Bending down on one knee next to the kid, but keeping his eyes on the tree line where the monster had taken off, he gave him a soft slap on the cheek. The kid answered with a dull moan.

“You good enough to get up?” Rooster asked. His guts were pulled tight and his nose wanted to call it quits. The smell was even worse here.

He lifted him with his free arm and walked backwards to the rest of the group. The relentlessness of the rain eased up, signaling the beginning of the storm’s end. Less than a minute later, it had passed, leaving them soaked, confused and frightened. And true to Mick’s word, the heat came back with a vengeance, as did the mosquitoes.

“Anybody got a clue what the hell that was?” Rooster said. His head swiveled in every direction, waiting for it to reappear. His heart was beating so hard he thought it was going to turn his ribcage to dust.

All heads turned when the little guy stammered, “I think I do, but I sure do hope I’m wrong.” 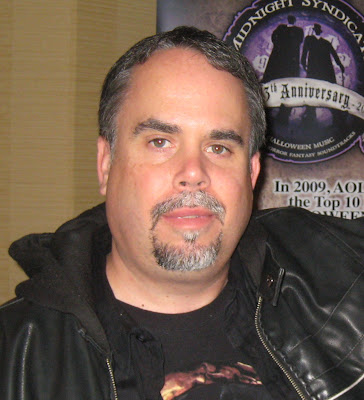 Hunter Shea is the author of the novels Forest of Shadows and Evil Eternal, as well as the upcoming Swamp Monster Massacre and Sinister Entity. His stories have appeared in numerous magazines, including Dark Moon Digest, Morpheus Tales and the upcoming anthology, Shocklines : Fresh Voices in Terror. His obsession with all things horrific has led him to real life exploration of the paranormal, interviews with exorcists and other things that would keep most people awake with the lights on. He is also half of the Monster Men video podcast, a fun look at the world of horror. You can read about his latest travails and communicate with him on his website or through the social media links below.