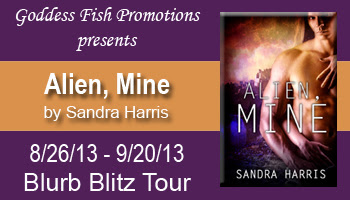 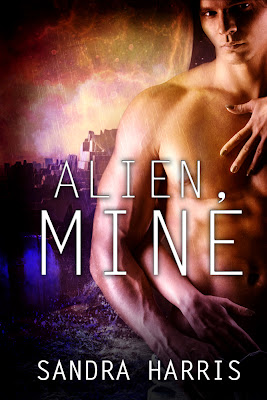 Torn from modern day Earth and stranded on the far side of the Galaxy, Sandrea Fairbairn must use every particle of courage she possesses to adjust to her new life and live for tomorrow.

Eugen Mhartak, a general in the Tri-Race Alliance Army, refuses to bow to the merciless Bluthen. Haunted by the loss of far too many innocent lives he has vowed to drive the ruthless invaders from Alliance space.

The strength and valor of Eugen Mhartak attracts Sandrea as no man ever has, but she struggles to read the enigmatic general’s heart. Determined to help him triumph over the Bluthen she uncovers a diabolical plot against the Alliance.

Drawn by the courage and exotic beauty of Sandrea, Mhartak battles to overcome the barriers of cross-cultural differences that separate them and claim her ardent interest. He must conquer his deepest fears to be the man she needs. When his principles are betrayed by his own government and he is faced with the impossible prospect of taking Sandrea’s life in order to save his home planet, Mhartak desperately searches for a way to keep safe both his world and the magnificent woman who has stolen his heart.

He glared back to the forest. A gan dressed in agricultural clothes with a familiar cast to his stance cradled a powerful rifle. Disbelief narrowed his eyes.

Amidst a fresh hail of enemy fire, the civilian hefted the weapon.

T’Hargen?
Alarm clanged a harsh warning through his mind. The ion wave emission gun his brother held would mulch any unprotected organ within its range.

“No!” he roared and launched himself towards the forest. Too late.

Fallen leaves whirled toward him on the leading edge of a percussion surge. The ion wave slammed into him, wrenching him from the ground and flinging him back. His armour alarm shrieked imminent overload and his armour failed to absorb the savage impact of unyielding rock. Brutal force hammered the breath from his lungs and almost snatched thought from his mind.

He shook the daze from his wits and staggered to his feet. Desperation and anger seethed through him, and he hurtled into the rocks.

Moans drifted on a soft breeze and Bluthen bodies littered the rocks. Blood oozed from their eyes, ears, and noses. His ruthless hands tossed corpses and injured aside.

Kulluk and Shrenkner sprang over the boulders, their horrified gazes sweeping across the carnage. A massive presence loomed beside him.

“Well, it’s nice to see you, too,” a familiar voice muttered.

Control snapped and Mhartak struck, gripped his long-lost, beloved brother by the throat and struggled not to throttle him.

Born in the far north of Australia, yearly cyclones, floods and being cut off from civilization for weeks at a time were the norm. An outrageous imagination helped occupy Sandra’s mind.

An abiding interest in astronomy and a deep-seated need to always see the good guys win naturally influences her writing. Not satisfied with the amount of romance in science fiction novels she set out to redress the balance.

She currently lives in sunny South East Queensland, Australia, with her husband and Cavalier King Charles Spaniel, who doesn’t seem to realize she comes from royalty and should act in a more appropriate manner.


Giveaway: Sandra will be awarding one Alien, Mine customized iPhone case to a randomly drawn commenter during the tour. This will be available for Apple iPhone 5, 4/4S, 3G/3GS, Samsung Galaxy S4, SIII/S3, SII/S2 or BlackBerry Bold 9900/9930 (winner to choose phone case size) and is US ONLY.