Review: The Edge of Falling 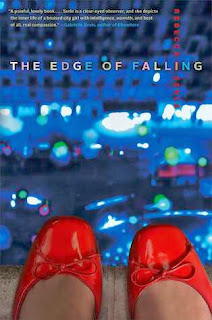 Growing up in privileged, Manhattan social circles, Caggie’s life should be perfect, and it almost was until the day that her younger sister drowned when Caggie was supposed to be watching her. Stricken by grief, Caggie pulls away from her friends and family, only to have everyone misinterpret a crucial moment when she supposedly saves a fellow classmate from suicide.

Now she’s famous for something she didn’t do and everyone lauds her as a hero. But inside she still blames herself for the death of her sister and continues to pull away from everything in her life, best friend and perfect boyfriend included. Then Caggie meets Astor, the new boy at school, about whom rumours are swirling and known facts are few. In Astor she finds someone who just might understand her pain, because he has an inner pain of his own.

But the more Caggie pulls away from her former life to be with Astor, the more she realises that his pain might be darker, and deeper, than anything she’s ever felt. His pain might be enough to end his life…and Caggie’s as well.

“Most great works of literature have a hero at their core, but this story is an exception.”

There’s nothing better than a book that starts with a quotable opening line and this one from The Edge of Falling by Rebecca Serle definitely fits that bill. This is our introduction to Mcalister Caulfield, better known as Caggie, a privileged teenager who lives on the Upper East Side of Manhattan.

Between her literary name and her Gossip Girl upbringing, Caggie’s existence seems pretty perfect from the outside. She’s got the kind of life those of us who spend our spare time basking in the teen worlds portrayed on The CW have always dreamed of, filled with money, gorgeous clothes, high society parties and free reign of Manhattan, but as the first line suggests, Caggie is not exactly basking in her good fortune.

Serle begins to peel back the curtain on Caggie’s ‘perfect’ life from the start of the story. Her family is broken and they haven’t recovered from the tragic death of her younger sister. Caggie is lost without her and doesn’t know how to go on being the person she was before, and that means isolating herself from the people closest to her and finding someone new to spend time with – enter the troubled Astor.


Caggie and Astor are drawn to each other because they both understand grief, something she doesn’t share with her ex-boyfriend or even her best friend and certainly not her family. Caggie has bottled up her emotions and pushed everyone close to her away or she believes they’ve pushed her away. But Astor is different and as Caggie begins spending more and more time with him, she thinks she’s found a new and improved version of herself. Unfortunately, her friends don’t agree.

While some aspects of the story might feel predictable to anyone who has ever read a Young Adult novel before (love triangle, slow secret reveal, etc.), Serle has an incredible way with words that still manages to pull the reader in to each page, even if you can guess the truth about what happened the night Caggie saved her classmate and everyone declared her a hero. After all, the first line of the book is Caggie stating that she doesn’t think of herself as a hero.

But Serle weaves Caggie’s tale in such a way that it doesn’t matter that it does take a little too long to get to the truth Caggie is hinting at from the opening. Caggie’s world is fascinating and anyone who has ever been to New York City or even watched it longingly on television can feel the city itself pulsating throughout the novel. The setting comes alive and in doing so, Caggie’s emotions have more weight to them because we can see everything through her eyes and feel exactly what’s bringing her down as she plays her favorite game at the crosswalks, hides out in a café or takes solace at her best friend’s place.

This is a novel of loss and grief and also one of redemption. There are not many happy moments throughout the story, but that’s okay. The weight on Caggie’s shoulders is too much for her to carry and Serle allows the reader to see that and feel it and it was impossible not to root for Caggie to find her saving grace. As a reader, I was pulling for Caggie and there were times I wanted to judge her for making the choices she did, but then I took a step back and remembered that she was a teenager who had lost her way and we’ve all been there. No matter how privileged a person might seem, life can still knock us all down.

I would definitely recommend “The Edge of Falling” to anyone who loves YA novels, especially the ones that are not cut and dry and give readers something to think about. The beginning of the book is a little slow, but the pace will pick up and the prose will keep readers invested until you want to see Caggie’s journey through to the end.

Rebecca Serle is the author of When You Were Mine and is an obsessive lover of all things pop culture. She blogs about The Vampire Diaries for New York magazine’s Vulture and can be found on Twitter: @RebeccaASerle. She, like Caggie, lives in Manhattan—just far from the Upper East Side.