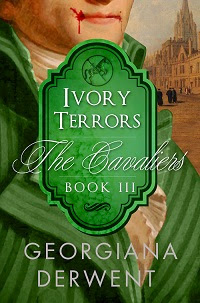 A Tale of the Posh, the Privileged and the Paranormal...

The Cavaliers are the most elite society at Oxford University. Though its members are universally wealthy, charming and handsome, they have a darker side - they are deadly vampires who have been secretly running the country for the last four hundred years. No one ever claimed that third year at Oxford University is easy, but Harriet French has more to worry about than just her final exams.

Richard, an ancient vampire with no love for Cavaliers or Roundheads, has dragged Harriet to his French fortress as part of his quest for revenge and power. Can Harriet support Richard’s plot to kill Augustine? He may have the country in his thrall, but he’s still family. She has no such qualms about killing the Roundhead leader Fea and her twin henchmen, but is she willing to sacrifice herself to do it?

And then there’s George, once the archetypal Cavalier, who now seems to have betrayed both Harriet and the society. It’s hard to be sure about anyone’s true loyalties and harder still to know the right thing to do. Ivory Terrors concludes the story told in Oxford Blood and Screaming Spires of Harriet French’s time at Oxford and her involvement with an elite vampire society.


Josh stared at the news website, barely able to comprehend the words his eyes were seeing.

The words swam on the page. His eyes couldn’t focus on anything but the picture of Julia the BBC had selected to accompany the news story. He recognised it as one that he’d taken the previous summer at the ball. They must have copied it from Facebook. She looked beautiful and fragile in equal measure.

He wanted to close the page and pretend that none of this was happening. Instead, he clicked on the video news story.

“Julia Jenkinson, a popular student at Oxford University, was the victim of a stabbing, after stepping in to save a child from an attempted kidnapping. A forty year old man is helping the police with their inquiries.”

The presenter's solemn words drifted over him. He reached into the top drawer of his desk and drew out a letter. When he’d found it in his pigeonhole a few days earlier, he’d considered it as a cry for help from a girl who seriously needed the support he so desperately wanted to give her. Now, it seemed all too prescient.

“I’m writing this in a brief moment of clarity. I don’t believe I’ll survive the Cavaliers’ party. If I die, don’t believe their lies about my suicide or accident. The society will have killed me, just like Stephanie and Alice and so many other girls.” He forced his attention back to the screen. A striking middle-aged woman with red hair, easily identifiable as Julia’s mother even without the caption underneath, tried her best to answer an interviewer’s questions through her tears.

“I can’t believe this has happened,” she sobbed, echoing Josh’s thoughts exactly. “My beautiful, clever daughter.”

"It must at least be a comfort to you that she died saving someone else,” the newscaster said.

Julia’s mother nodded. “It helps a little. That sums my darling girl up. Always helping others.”

The camera diplomatically panned away.

“Harriet told me the truth, and the more I see of them, the more I believe the unbelievable - they are vampires. If I don’t make it back from the party, go to her. Make her explain. Make her help. Avenge me.”

“I’m so grateful to her,” an equally tearful woman said, cuddling a small boy to her. “She saved my little boy from God knows what. I’ll bring him up to remember her. I hope the man who did this rots in prison.”

Josh looked back and forth between the letter and the computer screen, unsure what to believe. The news report sounded a thousand times more likely than a gang of vampires. And yet, what were the chances of Julia predicting that she’d be murdered on a certain night, and then dying in an unrelated incident? Besides, her strange behaviour over the last few weeks took some explaining.

“I’m sorry I’ve been so distant, scathing even. Rupert does something to my mind, I can tell. Most of the time, he’s all I can think about. I feel as though I love him more than I thought possible, and I utterly detest you. But then there are nights like tonight, when I haven’t seen him for a few days and he’s out of town, when my real feelings come back. I want to come to you tonight, but I don’t dare. So I’m sending this letter before I change my mind.”

The news report went on and on, almost as if someone wanted to ensure no one had any questions in their mind about how Julia had died.

Rupert appeared on the screen and Josh looked away. At best, Rupert had stolen Julia from him, at worst, he’d done something terrible to her mind and probably been responsible for her death. He’d never wanted to hit someone so badly. Rupert looked artfully distressed, his stupid posh face arranged into a tragic frown. His stuck-up voice stumbled over some words as though he could barely control his distress.

Josh had hoped that the filming was live, so he could see Rupert standing in the morning’s bright sunlight, and put aside the ridiculous idea of him being a vampire. There was no such luck. The news crew had clearly filmed his segment last night, soon after Julia’s death.

“It was terrible,” he said to the obviously enthralled female interviewer. “We hadn’t spent many weeks together, but I really loved Julia. I thought we’d have years to get to know each other better. All I can think of are the things I should have said to her and whether I could have done anything to save her from that madman. ” He wiped away a tear. “I’m sorry. I can’t go on.” Josh had seen enough. He slammed down the lid of his laptop before he put a fist through it. He read the last line of the letter for the hundredth time.

“Please believe that I still love you. I’m sorry I’ve put myself in so much danger and I’m sorry I made you help. You’re the most wonderful man I’ve ever met. If they kill me, don’t let it be in vain.”

Since he’d first heard the news, Josh had been too shocked to cry, but now the tears fell freely. He wanted to crawl into bed and never get back up, but that would be the ultimate betrayal. He’d do what Julia had wanted. He’d speak to Harriet, make her tell him the truth, and then get revenge. 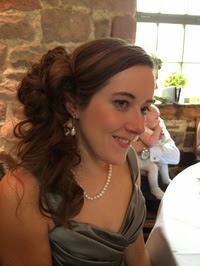 Georgiana Derwent is the author of the Cavaliers Series: Oxford Blood, Screaming Spires, and Ivory Terrors. She lives in London with her fiancé, Freddie, who’d fit right in to the Cavaliers. As you might have guessed from the books, she studied history at Oxford University, and is getting married there this summer.

Apart from the English Civil War that inspired the Cavaliers Series, her favourite periods are the Italian Renaissance, the Tudors, and the British Regency. Hopefully, she’ll get to write about one or all of the others soon.

Georgiana loves to read literary novels that don’t forget about plot, and fantasy, paranormal, and historical novels that don’t forget about prose. Her absolute favourite books tend to be those that blur the lines between the two. She’s loved vampire novels since her teens, though the vampires have to be at least a bit bloodthirsty and fantastical. If the plot of a paranormal romance would be basically the same with human characters, she’s generally not interested.

Georgiana is a qualified lawyer and currently works for the British Government. She loves her day job, but writing The Cavaliers makes a nice change of pace, even if it’s sometimes very difficult to find the time in-between running the country!